Horrific Mass Execution of Iraqis in the hands of ISIS monsters..

Mass execution photos of Iraqi soldiers/civilians by jihadi savages. Photos show hundreds of Iraqis (majority Shias & Alawites) being transported in trucks and executed by ISIS. Hundreds, perhaps thousands, were transported and met the same brutal fate. (It is reported to be 1700)

A couple of days ago, ISIS declared that they had captured 4,500 Iraqi soldiers in Tikrit.

These photos were released by ISIS — they are not doing this under cover of night or in hiding. They are proud of their slaughter in the cause of their -twisted and sick- Takfiri belief..

WARNING: Many of the images below are graphic. The intent of publishing these photographs is to document the war crimes committed by the ISIS.
The images are a selection of more than 60 published by the ISIS' Salahaddin Division. You can view all the photographs here
.. 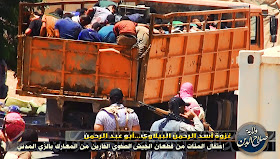 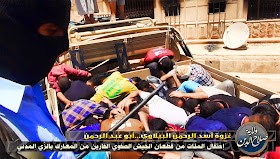 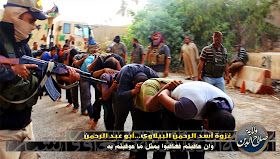 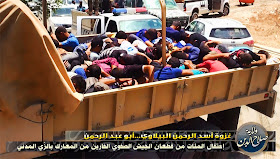 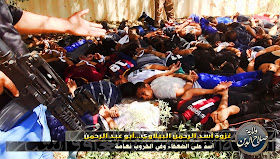 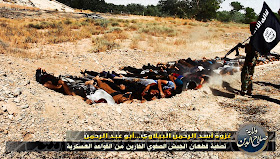 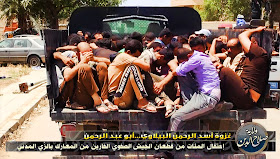 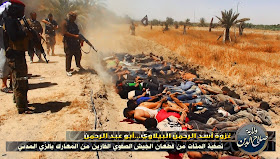 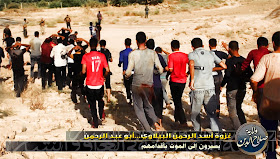 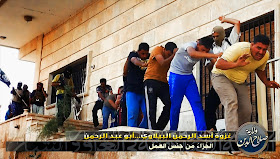 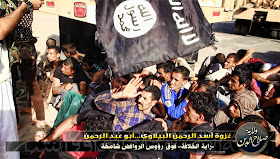 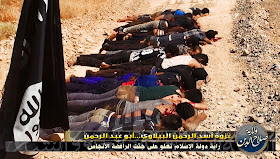 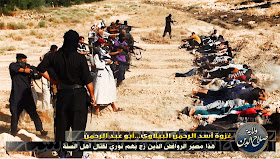 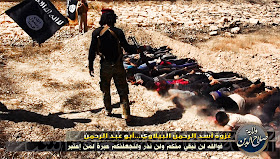 The full horror of the jihadists’ savage victories in Iraq emerged yesterday as witnesses told of streets lined with decapitated soldiers and policemen.

Blood-soaked bodies and blazing vehicles were left in the wake of the Al Qaeda-inspired ISIS fanatics as they pushed the frontline towards Baghdad.

They boasted about their triumphs in a propaganda video depicting appalling scenes including a businessman being dragged from his car and executed at the roadside with a pistol to the back of his head. The extent of the carnage came as: 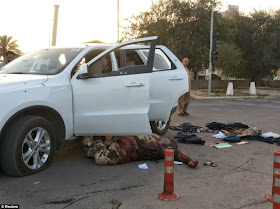 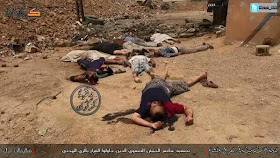 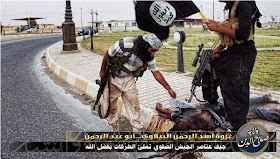 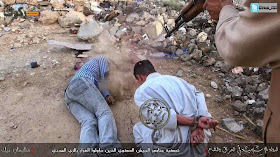 Meanwhile, Human Rights Watch Director (and unofficial al-Qaeda spokesman, it seems) Kenneth Roth is watching ISIS' back. He is full of praise for the head cutters/ mass executioners.. Below is his Twitter post:

No, Mr Roth, no, of course, they are not "alienating" the local population.. No alienation. Just beheadings and summary executions!!. ..
.

The Islamic State of Iraq and the Sham's administrative division in Salahaddin proudly displayed photographs of the capture and execution of Iraqi soldiers after it took over a base in the province.

The graphic photographs were released today on the Twitter account belonging to Wilayat Salahaddin, or Salahaddin Division. The ISIS has divided its "state" in Iraq and Syria into 16 administrative units, or wilayats.

The stream of photographs begins by showing ISIS fighters in dirt-caked pickup trucks with machine guns mounted in the beds traveling to Tasfirat prison in the city of Tikrit, and then launching an assault with dismounted troops. Tikrit fell to the ISIS earlier this week.

After capturing the base, the ISIS takes photographs of dozens of US-supplied armored Humvees, Ford and Chevy pickup trucks, and various military transport and supply vehicles that were left behind.

ISIS fighters are then photographed posing over the bloodied and mutilated corpses of the slain soldiers. The ISIS photos show the capture, transport, and execution of scores of Iraqi soldiers. Most of the soldiers are in civilian clothes, but some are seen wearing civilian clothes over their uniforms.

Iraqi soldiers had reportedly shed their uniforms and deserted en masse as the ISIS blitzkrieg advanced from Mosul to Tikrit and on to the outskirts of Samarra in the course of one week. At least four Iraqi Army divisions are said to have melted away during the ISIS onslaught.

In the photos, the Iraqi soldiers are rounded up at gunpoint and placed on flatbed trucks, some of which appear to have been captured from the base. Some of the ISIS fighters are seen holding US-made M-16 assault rifles, which had been issued to the Iraqi Army and police forces.

The ISIS is said to have executed thousands of Iraqi soldiers during its southward advance to Baghdad. Several Iraqi military bases are believed to have been overrun. Forward Operating Base Speicher, which once was a major US military hub in Salahaddin province, was reportedly seized by the ISIS during its southward push.

Over the past week, the ISIS took control of Ninewa and most of Salahaddin province, as well as parts of Diyala province. Most of Anbar province fell under ISIS control in January.